Is the Google Disavow tool still relevant in 2021?

What is the Disavow Links Tool and where did it originate?

One of the originating ways Google had in place to identify a web page that deserved to rank, was by looking at the links from external pages pointing to it.  The intention for calculating the websites value by looking at the number of domains linking to it, was a great starting point.  However, this opened the door for webmasters to abuse the system and artificially create low quality and paid for links back to their website. For many years Google has been doing its best to identify and eliminate spam.  Ultimately, Google is fighting against web spam in order to return the most relevant, authoritative and trustworthy web pages for any given search query.  Having a quality link profile is a vital element for ranking.

Back in the day, way back in 2005 Google introduced the nofollow attribute, as a way of tackling things like comment spam and other user generated content.  The attribute meant that Google was to not follow that link and pass on any value to the destination page. At the time really spammy sites were starting to rank considerably well, causing the high quality sites to lose visibility.  Something had to change. There was an uptake on adding the attribute to blog comments, user generated content, links in press releases etc.  Basically, anywhere it was possible to easily proliferate spam and easy to just manually insert a link.  Websites like YouTube, Reddit, Wikipedia etc adopted the attribute.

Also, just as importantly, it was now stated in Google’s Webmaster Guidelines that any links that are specifically paid for must have the nofollow attribute applied.

In April 2012 Google rolled out its first version of the Penguin algorithm.  The algorithm was introduced as a way of recognising  manipulative link practices as well as keyword stuffing.  Websites benefiting from these practices were demoted allowing the good quality websites to rank well.  This is the first time swathes of websites were targeted and hit by algorithmic penalties as well as manual penalties for having unnatural links.

There have been 10 recorded updates of Penguin up until 2017 when it became part of Google’s core algorithm.

Introduction of the Disavow tool

The disavow tool was introduced in October 2012 as a way to inform Google to ignore those listed domains and webpages detailed in the submitted disavow file.  The tool was initially introduced as a mechanism for webmasters to tackle manual penalties.  Every effort should be taken to contact sites and physically remove the dubious links, or get the webmaster to add the nofollow attribute to their links.  Where that was not working the disavow file would be populated with the remaining links.  The file would be submitted with a reconsideration request to Google.

For algorithmic penalties Google stated that when a page is disavowed the effect was immediate, once the page is crawled, but it turned out that webmasters were only seeing recovery at the next Penguin update.

What kind of links is the Disavow tool used for?

The disavow tool can have any link or domain added to it.  So it’s important to understand the type of link that is appropriate to add.  Misuse and misunderstanding can damage the link profile and impact rankings.

What makes a bad link?

One way of looking at the question is to ask what is a really good link?  Typically it’s a natural editorial link, placed unprompted on a high quality domain within a high quality piece of content, where the vast majority of any of the links placed on that site are of similar quality. All the links are in context and related to the target page.

Anything else has the potential to be harmful.  For example, comment spam, low quality guest posting, out of context links, links coming from toxic sites, paid for but not nofollowed, anchor keyword abuse, the list goes on…

Negative SEO is considered to be a form of attack when someone purchases a big batch of bad backlinks and points those backlinks to your site.  Because those links are unnatural, spammy, paid for etc., they greatly increase the risk of a penalty being imposed.

The general consensus is that active negative SEO is quite rare.  But there are occasions where it is possible to get caught up.  One possibility and something we have experienced is a website being used as “another linking” domain in a PBN (private blog network).  So somewhere, somebody has paid for a PBN or PBN’s to be created and your website has been unlucky enough to be used as one of the secondary outbound links within these networks. Note, a PBN is a network of websites that are artificially created to manipulate link equity going in to the site paying for the PBN service. It is not somewhere you would want your website to be anywhere near.

Where is the Disavow tool?

The disavow tool is found at https://search.google.com/search-console/disavow-links.  The tool is linked to every property you have set up in Search Console, so the correct property is chosen from the dropdown.  As the message says the tool is an advanced feature and used very cautiously. 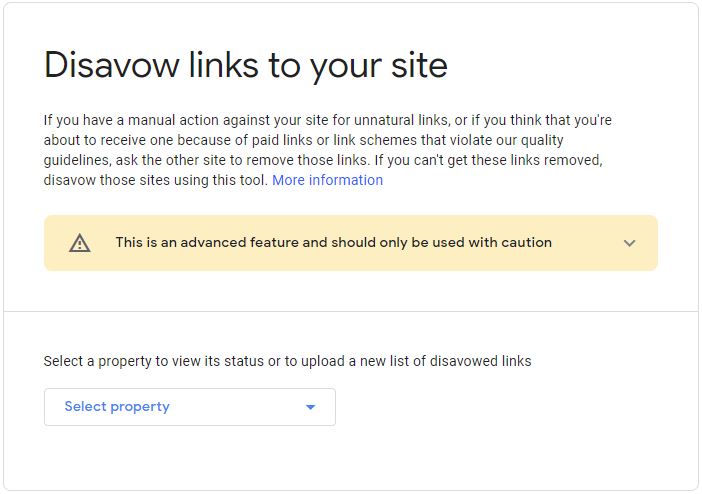 Using the Disavow tool in 2021

To use or not use the Disavow tool?

Just because a domain shows to be of low value doesn’t mean it’s a domain, or pages within it that should be disavowed. The key for including a domain in the disavow file is whether the link is genuine, offering real value, not “paid for” or manipulated and ultimately is there for the true benefit of the visitor.  So it is important to manually inspect all domains and links in the link profile and determine if they are genuine, as well as looking at the overall quality and relevance of the website linking.

Historically it is known that Google ignores links that are nofollowed and won’t use those links in assessing and rewarding, or penalising.   No page rank is passed on from these links.

But, from the 1st March 2020 Google has started to treat nofollow links as hint when crawling and indexing.  Historically, nofollow was a directive.

On the Google Search Central Blog –

“We’ll use these hints -- along with other signals -- as a way to better understand how to appropriately analyze and use links within our systems. Why not completely ignore such links, as had been the case with nofollow? Links contain valuable information that can help us improve search, such as how the words within links describe content they point at. By shifting to a hint model, we no longer lose this important information, while still allowing site owners to indicate that some links shouldn’t be given the weight of a first-party endorsement.”

Therefore on a case by case basis it is important to assess the quality of the overall link profile which should naturally have a mix of both followed and nofollow links.  If the pattern of nofollow links has a strong pattern of associating the website with spammy content, dubious domains or problematic anchor text, it may be a good decision to add certain URLs to the disavow file.  It’s like saying “Ok Google, I understand you won’t be passing on any link equity from these nofollowed links, but I want you to know that I really want my website to distance itself from these dubious, unrelated websites when you are evaluating mine with any of your algorithms.”

Again, it has to be clear that disavowing a section of nofollow links is not now the new way to go, the thing to do by default.  Each site must be assessed and judgement made on the overall link profile and the neighbourhood and quality of those nofollow links.

Hang on! Was Penguin 4.0 the end of the Disavow tool?

But wait! The chatter on the release of Penguin 4.0 in September 2016 was that Google now understood what was spam and would simply ignore links that are there to manipulate search results.  The only concern now would be to focus on any manual penalties taken against websites.  Only upload a disavow file if the website was required to submit a reconsideration request for a problematic link profile.

But the reality according to Gary Illyes from Google is that the use of the disavow file has not changed, it never did.

“That can definitely be the case. So it’s something where our algorithms when we look at it and they see, oh, there are a bunch of really bad links here. Then maybe they’ll be a bit more cautious with regards to the links in general for the website. So if you clean that up, then the algorithms look at it and say, oh, there’s– there’s kind of– it’s OK. It’s not bad.”

Will Google continue to use links to pass value – yes.  Is it likely that Google uses signals from a link profile in other algorithms – yes.  Is it possible to still be on the receiving end of an unnatural links manual penalty – yes.

If your site is on the wrong end of a manual unnatural link penalty, then yes absolutely, the Disavow tool must be used.

For anything else the prudent approach would be to look closely at a link profile and actively determine whether each link is there for honest, plausible and meaningful reasons, above SEO purposes.  If there is any doubt, those links and the websites they are on, should be further inspected. Any links or domains that fail the test can potentially be added to the disavow file and submitted.  With care!